Why did a judge issue a white card in a soccer match? – International Soccer – Sports 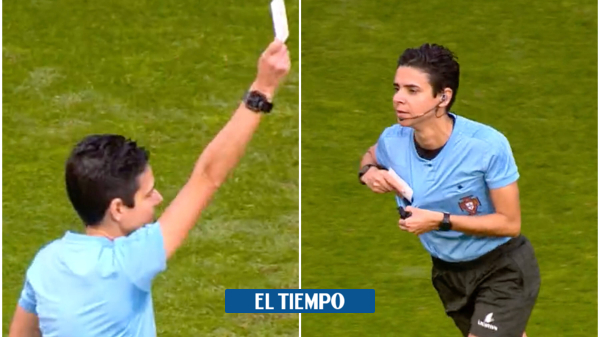 The ball rolls on the green grass while several girls run after it. With a diagonal pass and a lightning kick, the ball shoots towards the goal.

The tension that is felt in the stadium is enormous, while the goalkeeper, attentive, tries to decipher the trajectory of the ball. With an agile movement, he shoots to the right, but suddenly the ball enters from the other direction.

The stadium begins to shake the only thing that can be heard is the shouts of the stands reciting a prolonged ‘goooool’.

It was then the third goal scored by the Benfica Football Club, better known as Benfica, in the Taça de Portugal match against Sporting Lisboa on January 21.

(It may interest you: This is the statement of the woman who denounced Dani Alves for sexual assault).

However, that was not the only exciting moment of the day. Shortly before the break, the referee in charge noticed that part of the medical staff was treating a player on the bench.

It was at that moment that Catarina Campos, the young woman who was refereeing the match, ran towards the health personnel and showed them something unusual: a white card.

What does a white card mean?

Neither red nor yellow. The card that Campos drew probably for more than one was an anomaly.

And it is not for less, because in a certain way this card is not common in football matches. Unlike the well-known red and yellow cards, the white card seeks both recognize the ‘Fair Play’ (or in English, ‘Fair Play’) that happens during the dispute.

Campos thus became the first referee in the world to show a card of any color other than yellow or red. Traditionally, cards in soccer are only shown when there is little discipline during the match, but this may change throughout the game in the coming years.

The referee recognized the gesture of the personal doctor.

This initiative was led by the Football Federation of Portugal and the Board of the International Football Association, which is why, despite having been used in a professional match, it is still not authorized to appear in tournaments such as the Premier League.

Even so, the measure implemented in Portugal is not entirely new. Michel Platini, former president of the Union of European Football Federations (Uefa), had already discussed the issue in his book ‘Let’s talk about football’ about white cards. Initially his objective was to be a kind of peace flag in the midst of the fights that can be generated in the matches by the players.

Michel Platini is considered by Fifa as one of the best players of the 20th century.

However, the idea was rejected by Joseph Blatter, president of Fifa, arguing that such radical changes could not be made within the field of play. According to what he said at the ninth edition of the Dubai International Sports Conference, apparently «they would be fine with the red and yellow card.»

(Also: Outstanding footballer in the Qatar 2022 World Cup destroyed his Lamborghini in Monaco).

The medical bodies of Benfica and Sporting had to help a fan in the women’s derby for the Taça de Portugal 🇵🇹. After their quick action, they were recognized with a white card. ⬜️⚽️❤️👏pic.twitter.com/hrJu6L9XCy

The card is probably more of a symbolic gesture, as it is not intended to punish or reward teams as such. Even so, the positive reception it had from the fans could be an indication that this measure could remain in the future.

Finally, with a score of 5-0 against Benfica, they advanced to the semifinals of the tournament. It should be noted that, according to the British newspaper ‘Daily Mail’, this happened in front of more than 15,000 fans, which is a record number of attendees in women’s football.

Elon Musk fears for his life and issues a warning: «If I commit suicide, it is not true»

‘I only said what he did,’ Guatemalan president on clash with Petro

To mortify Shakira? Clara Chía reappears after the song