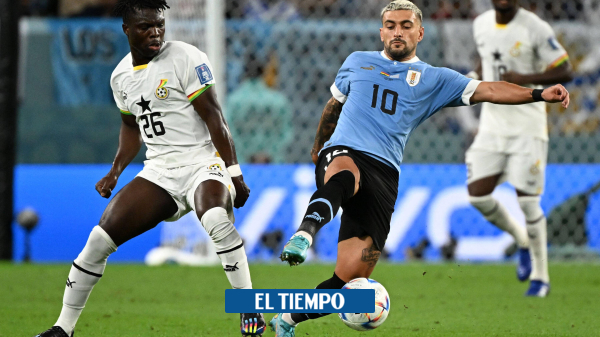 Jose Maria Jimenezdefense of the Uruguayan team, raised his elbow and hit an employee of the fifa on the field of play, when he was going to protest to the referee daniel siebert near the locker room, at the end of the game of the last day of group H against Ghanawhich led to his removal from Qatar World Cup 2022, according to several videos at the foot of the field of the moment spread on social networks.

The Fifa Disciplinary Code is the anchor for media such as ‘El País’, from that nation, to speak of a «historic sanction».

(Strong reaction from Antonela Roccuzzo after Shakira’s strong song to Piqué)
(Gerard Piqué, after Shakira, receives a second blow in less than 24 hours)

It is stipulated in article 12 of the Disciplinary Code, the sanction for an act of this nature could be about fifteen games.

«At least fifteen games or an adequate period of time for assaulting (elbowing, punching, kicking or biting; spitting, hitting, etc.) a match official,» the regulations stipulate.

The Uruguayan Football Association presented the disclaimers to Fifa and it was warned that there is opposition against the Federation for homophobic songs, of which they were subjected Diego Godín, Edinson Cavani and Fernando Muslera.

The file was opened on Monday, December 5, but the Federation acted quickly and presented defenses.

It is pointed out that next February, the leaders will know the sanction issued by Fifa, but it is understood that in the case of Jiménez it will only affect him playing with the selection of his country.

The foregoing indicates that the player cannot continue to be part of Atlético de Madrid without suspension.

(Piqué, betrayed by his mother? Unexpected reaction to Shakira’s strong song)
(In Arabia they want Messi: this is the juicy offer for the Argentine)