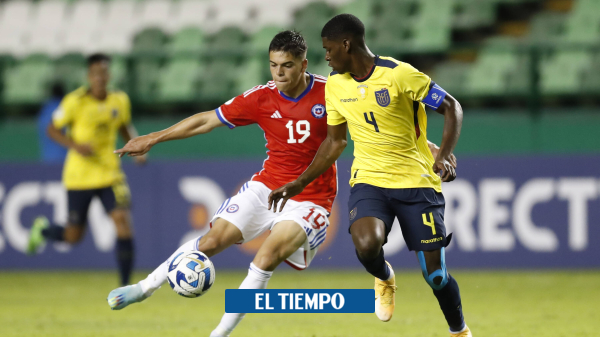 Ecuadorcurrent champion, saved this Friday a 1-1 draw against Chile in his first outing in Group B of the south american championship that takes place in Colombia and that gives four tickets to the World Cup of the category, which will be held in May in Indonesia.

Chile went ahead with a goal from the striker vincent conelliwho capitalized after 25 minutes a precise pass from his teammate Dario Osorio to finish off and beat Gilmar Napa. Equality came for Ecuadorians in one of the few arrivals that he could spin.

That was after 33 minutes thanks to a kick from Raúl Cuero from the head of the box. Coach Jimmy Bran breathed easy. Conelli was a nightmare for the Ecuadorian defence, who struggled to control him. The striker even released a shot and the ball hit horizontally and when it fell it gave the visual sensation of having crossed the goal line but the goal was not validated by referee Carlos Ortega.

Unlike other tournaments, the South American does not have the help of VAR, which could well solve this impasse.

In the absence of 15 minutes to close the first half, Conelli himself smashed another ball against the vertical defended by Napa who was already without a chance to stop the shot.

On the contrary, Ecuador showed flaws in the defense and few ideas in the midfield and waiting for a play that could define their attackers. Knowing that they had to rebuild the game, Ecuador came out with the same players but more convinced that they had ways of giving Chile problems.

Alan Minda, Justin Cuero and José Klinger gained prominence and brought danger to the premises of Vicente Reyes, who in the first half was almost a spectator. However, the Chileans did not give in and Conelli, a striker for Unión Española, was once again present with a shot that saved Napa in the one-on-one. They were 58 minutes.

In the last third of the game, the coaches moved their benches in search of victory, but the results were not as expected because none could increase the score to come out with their arms raised in victory. Around 75 minutes Minda was about to defeat Reyes in one of the few clear chances that Ecuador had in the second part of the game with a very low public presence.

On the second day, La Verde will face Ecuador on Sunday, while La Vinotinto will rest.

Chile, meanwhile, awaits Uruguay, which makes its debut in this South American. Now the standings are dominated by Bolivia with three points followed by Chile and Ecuador with one point each. Venezuela, which has already played one match, and Uruguay, which has not played, are without points.