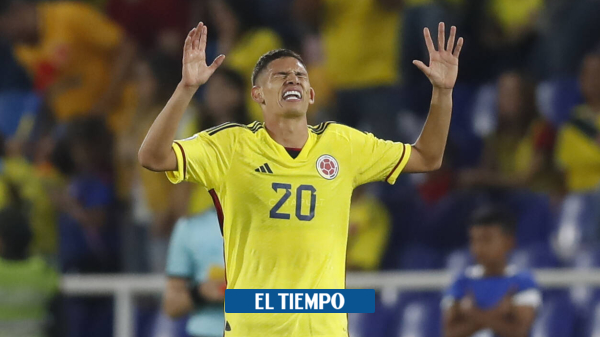 daniel luna he appeared as the men behind the goal should appear, in space, marking the pass, sensing where the ball that passed him would go with his hand miguel monsalve, and defined precisely so that Colombia tied on Thursday in its debut in the South American sub-20 against Paraguay, so that they did not lose. This Saturday, by the hand of Luna, it is time to win or win against Peru.

Colombia had a bittersweet debut, but did not lose. Luna was the hero of the tie. He wandered in the attack, from left to right, and the goal found him in the middle. Luna was delighted with emotion, because he had reasons: it is Colombia’s first goal in this South American tournament, to which he is local, it was the goal that prevented defeat and it was his first goal at Pascual Guerrero.

Moon plays in the Deportivo Cali, so his home is the Palmesaca stadium. But he had been longing for a long time to score in the stadium where America plays. And what better than wearing the yellow shirt of the National Team, under the watchful eye of the fans, the press, the confident scouts and his grandmother, who was finally able to see him play and who was his inspiration. «What an immense joy, my grandmother,» said Daniel in the mixed zone, and he did not stop smiling, with that smile that reflects his 19-year-old.

They are 19, but with a route. Daniel has made his short career in the green team from Cali, with 23 games and 4 goals in the League in 2022. So he has experience to help the team and to analyze the debut:

“In the second half we had the peace of mind and confidence that we always have to have, we tied, it’s turning the page and thinking about what’s to come. It’s a pity that we don’t get the three points”, Luna told Win Sports.

Daniel knows that Peru has to win, and for that the team must show its face in the second half against Paraguay. “This is just beginning, we have potential to show and we are convinced that we are going to do very well”, he says.

Group A
Colombia vs. Peru
6:30 pm
Television: Caracol and RCN