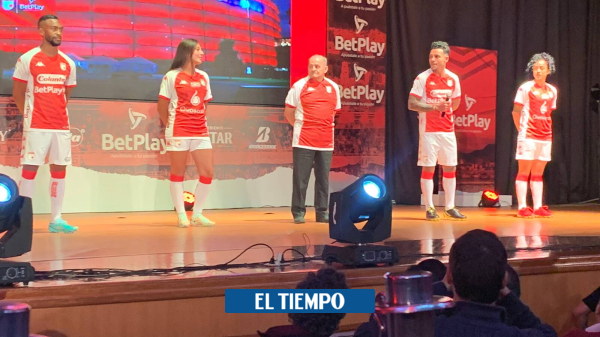 Santa Fe start engines to start the season. The cardinal team made an ambitious bet, with several reinforcements that motivate the fans and with whom the team hopes to be in contention this semester.

This Monday, in the Governorate of Cundinamarca, Santa Fe kicked off this new project with the official presentation of its male squad, as well as the female one.

The event, decked out with red curtains, a red mat, red lights and the cardinal jerseys of the fans and invited members, began precisely with the presentation of the new clothing from the Kappa firm, both for training, competition and presentation.

“In this new collection, Kappa and Independiente Santa Fe seek to pay homage to the history of the club and exalt the beauty of its city of origin, thus delivering unique and exclusive garments that reflect the environment and history of the club, making Bogotá the main concept ; that is why the iconic eastern hills appear on the chest and border the heart of the competition garments of the team that declares itself Proudly Bogota”, says Kappa in a statement.

First the main shirt will be on sale, then the away white.
The new faces of Santa Fe were on stage, they are the DT Harold Rivera, the players Julián Millán, Fabio Delgado, Iván Rojas, Cristian Marrugo, Fabián Sambueza, Alexis Manyoma, Fabián Viáfara, Juan Daniel Roa, Hugo Rodallega, Marlon Torres, Kelvin Osorio. Along with them, references such as Wilson Morelo.

“The goal this year is to get a new star… Today the responsibility lies with the players, but we have to support them. Complaints and criticism must end…”, said the president eduardo mendez. «The feeling is great, the first champion of ColombiaIt is a source of pride for me,» said Rodallega.

Santa Fe also presented its women’s team that will seek glory this year, with players like Gabriela Huertas and Orianica Velasquez.

Until February 3 there is the possibility of acquiring season tickets for the Betplay League, after the dates for fans are extended.

(Shakira and Piqué make a ‘truce’ for their son’s birthday: this was the celebration)
(Nairo Quintana ‘did not respect the rules’: the truth of the ‘veto’ in Europe)