Rafael Nadal, eliminated from the Australian Open; his wife breaks down in tears-Tennis-Sports 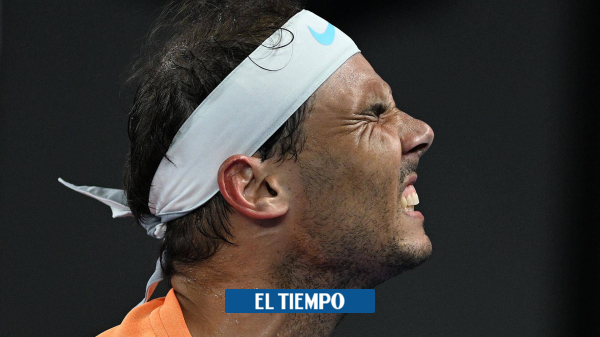 Trailing from the start of the match against the world number 65, the Spaniard was injured in the second set and finished the match clearly limp, conceding his earliest Grand Slam elimination since Australia in 2016.

McDonald had only won once in his entire career against a top 5 player, in 2019 against Argentine Martín del Potro, but he promised a «memorable» match and in the first game he already broke the Spaniard’s serve.

Grown up against the greatest Grand Slam winner in history, the Californian became a wall, arriving and returning all of Nadal’s blows, who became desperate until he made mistakes that were unusual for him.

With another missed serve and a 4-1 deficit on the scoreboard, Nadal was finally able to break the Californian’s serve who, anyway, took the first set.

McDonald’s display continued in the revamp, defending tooth and nail on Nadal’s rushes and landing winners when necessary.

In something unusual for him, Nadal, who had previously been angry with the chair umpire for the short time granted between serve and serve, he yelled at the verse again trailing 2-0 in the second set.

Then came a mini-reaction from the Spaniard who, varying the direction of his blows more and going up to the net more often, managed to equalize the score.

But when the game seemed tilted in his favor, he gave up another serve and was injured in the middle of a run to try to reach a corner ball at 4-3 on the scoreboard.

The Spaniard stopped with apparent pain and remained leaning against the barrier, covering his face with his arm. He finished the game and, with a face of circumstances, he withdrew to the locker room, while a camera pointed at his wife in the stands, wiping away a tear.

Clearly hurt, barely able to run, he came back to try and finish the match.

With quick points, set serves and clutch shots they had hardly shown before, they held the score almost to the end of the set, until McDonald got a break in the penultimate game.

The cry of Mery Perelló

Mery Perelló, who runs her husband’s foundation, could not hold back her tears when she saw Nadal’s despair on the court and the suffering that defeat brought him.

Sitting next to other relatives of the Spaniard, trying to hide her emotions just when the official broadcast of the tournament focused on her.

According to the Spanish media ‘Última Hora’, it is not usual for Perelló to accompany the tennis player. However, for this occasion, she traveled with his three-month-old son, who for the first time was aware of his father at an important event like this.

(Keep reading: Nairo Quintana: the outlook is clear, this would be his team for 2023).

Minutes after his defeat, Nadal was nostalgic during the press conference. «It’s been a couple of days, but nothing comparable to today after that movement. I don’t know what’s happening, if it’s in the muscle, in the joint. There are antecedents. Now I feel like I can’t move but I don’t really know what It’s until I do all the tests,» he said in response to the injury to his hip.

Although he said that he even had the possibility of retiring in the middle of the match against the American, he only thought that «being the champion» he did not want to do it.

«I can’t say I’m not mentally destroyed right now because I would be lying. It’s hard. I hope it’s not serious. I’ve been through this too many times in my career, and I’m ready to do it again even though it’s not easy at all,» he said. .

«Tomorrow will be another day,» he concluded.

By losing at the Australian Open, also fell from second to sixth world position on the ATP list after failing to defend the 2,000 points earned from his victory at the 2022 Australian Open.

Nadal’s presence in the top-10 could go into alarm as his closest pursuers (Felix Auger-Aliassime, Taylor Fritz, Holger Rune and Hubert Hurkacz) still have options at the Australian Open. FAITH

Trends WEATHER
*With information from AFP and EFE

You can also read:

– The aesthetic «retouching» that Piqué would have paid for Clara Chía, according to paparazzi.

– They reveal Messi’s last words before the final penalty in the World Cup.