Pelé: the last preparations for his burial, this Tuesday – International Football – Sports 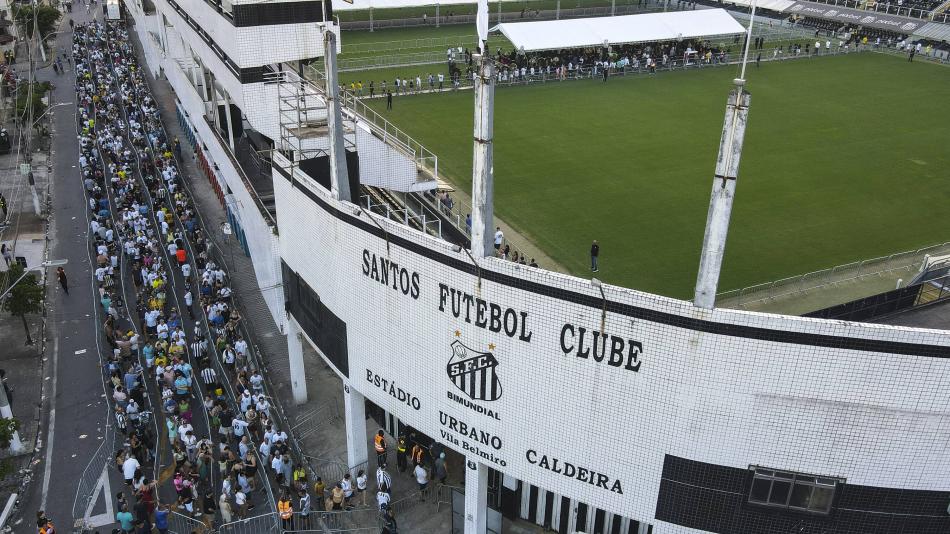 Thrilled, thousands of Brazilians and soccer authorities bid farewell to their king peel, He disappeared on Thursday at the age of 82, at a wake at the Santos stadium, the team where he forged a good part of his legend.

The many supporters, who came from other cities in Brazil, lined up in front of the Vila Belmiro stadium and chanted «Pelé, Pelé!», waiting to enter the field, where the open coffin was placed surrounded by wreaths of white flowers.

Through tears, his third wife, Marcia Cibele Aoki, was one of the first to reach out. Dressed in black, she passed her hand over the head of the star, whom she won in 2016. At least three –Edinho, Kely and Flavia– of the six living children of the unforgettable ’10’ were also present.

The gratitude of the followers of ‘O Rei’

His followers were also full of praise for the footballer who made them vibrate like no other while they waited to enter the stadium.

«My childhood was marked by what Pelé did for Brazil, in the World Cup matches,» explained Carlos Mota, 59, who traveled from Rio de Janeiro with his 12-year-old son Bernardo.

«I always told my son that there are three things that are not discussed: that the ball is round, the grass is green and Pelé is the biggest,» he added.

The remains of the only player to win three World Cups (1958, 1962, 1970) arrived at dawn in a caravan from the Albert Einstein Hospital in São Paulo, where he was hospitalized from November 29 until his death a month later.

Several flags of different sizes decorated the Santos stands: one with ‘O Rei’ on his back, showing the 10 shirt he immortalized, and others with the messages ‘Long live the king’ or ‘Pelé, 82 years old’.

Entry will be allowed «uninterrupted» until this Tuesday at 8 am Colombian time, after which a procession will begin through the streets of Santos, 75 kilometers from São Paulo.

It will end in a mausoleum in the city with a religious ceremony and a burial reserved for the family. In that same cemetery rest the remains of Pelé’s father, brother and aunt.

The funeral caravan will pass by the house of the mother of the legendary ex-soccer player, Doña Celeste, 100 years old, who does not know of the death of her son. «We told her, but (…) she is not aware,» said Maria Lúcia do Nascimento, Pelé’s sister.

The death of the former attacker, who claimed 1,283 goals in his 21-year career, most of them at the ‘Peixe’, caused a shock beyond the world of football and prompted messages of condolences from all over the planet. But there was an expectation to know if his death, as a result of colon cancer that was detected in September 2021, would cause a massive attendance at the wake due to the year-end holidays.

The funeral, with the coffin open, began five minutes late.

Few people approached the hospital that treated him in São Paulo and Vila Belmiro in the previous days. Thousands endured hours of waiting under a hot sun to bid farewell to the man who made Brazil famous.

Pelé spent a month in the Albert Einstein until his death on December 29. “We were with him” on December 21, explained his sister Maria Lúcia. “He was very calm. He already knew that he was leaving, ”she commented.