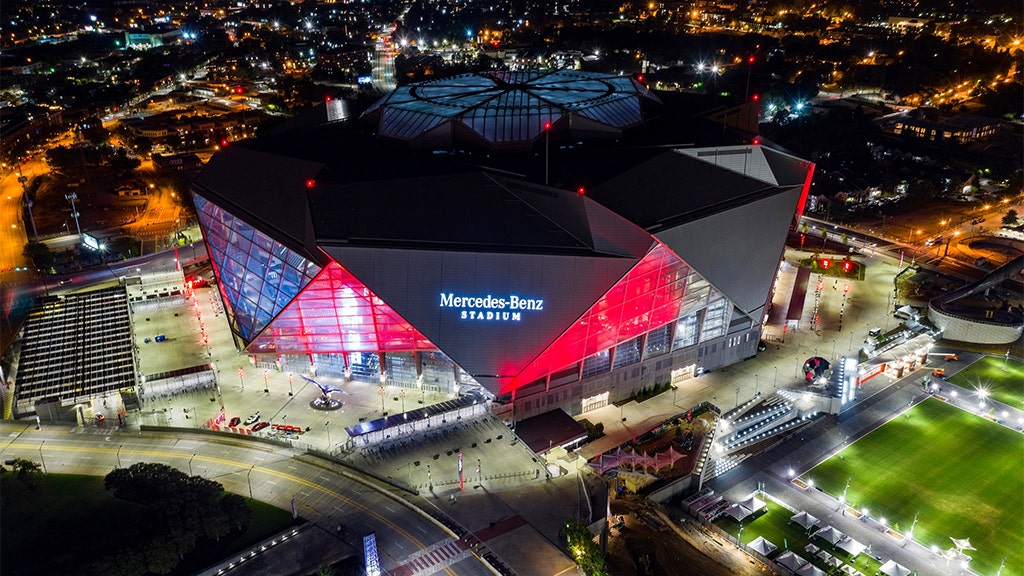 Mercedes-Benz Stadium, home of the Atlanta Falcons, has been chosen as the neutral site for a possible Bills-Chiefs matchup in the AFC Championship, the NFL announced.

The AFC Championship is scheduled for January 29. Team owners passed a resolution earlier this month that opened the door for the conference championship to be played at a neutral venue.

The league made the decision after the Week 17 game between the Buffalo Bills and Cincinnati Bengals was canceled as a result of safety Damar Hamlin collapsing on the field and going into cardiac arrest.

The Mercedes-Benz Stadium is seen in this aerial photo in Atlanta.
(AP Photo/Danny Karnik)

The Bills announced Wednesday that Hamlin has been released from the hospital and will continue his recovery at home with his family and the team.

«We are encouraged by Damar Hamlin’s continued improvement and progress in his recovery, and Damar and his family continue to be a priority for the entire NFL community,» NFL Commissioner Roger Goodell said in a statement Thursday.

«We are also grateful to Arthur Blank and the Atlanta Falcons for agreeing to host the AFC Championship Game in Atlanta should the Bills and Chiefs advance. We thank both clubs for their assistance in the planning process. We know, if necessary, Mercedes-Benz Stadium will provide a world-class environment for the competing teams, our fans and partners.»

Gabe Davis, number 13 of the Buffalo Bills, catches a touchdown pass during the second quarter against the Kansas City Chiefs at Arrowhead Stadium on October 16, 2022 in Kansas City, Missouri.
(Photo by Jason Hanna/Getty Images)

Earlier this week, Chiefs quarterback Patrick Mahomes weighed in on the possibility of playing the conference championship game at a neutral site.

«Nothing was going to be fair to anybody, I don’t think so. It’s a situation we’ve never encountered before,» Mahomes shared Monday. «But at the end of the day, I was so happy that Damar was better and that’s the most important thing.

«So, he was better and he was in a better place, we were ready to do whatever scenario happened. So if that was a neutral site, if he went there (to Buffalo), whatever, we were just ready to go out and play. But first we have to win that first game, so let’s worry about whoever we play in that first round, or that first round for us.»

The neutral site will only be used if Kansas City and Buffalo reach the AFC Championship round. The NFL determined that those teams played an uneven number of regular season games, with both having a shot at the top seed if all AFC teams played all 17 games.

Atlanta had previously been designated as a potential backup venue for playoff games before the regular season began, due to the NFL’s contingency policies. The city of Atlanta is almost equidistant from Buffalo and Kansas City.

The league also announced that information on tickets for the neural site game will be released at a later date.