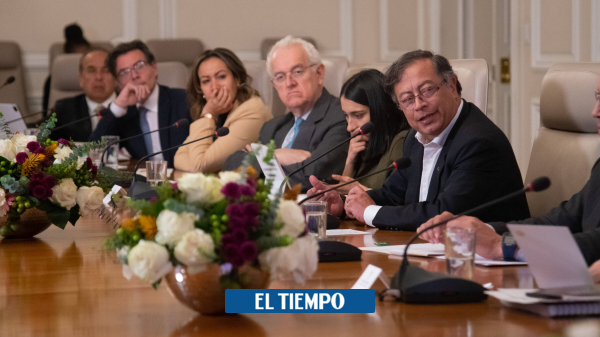 There is no analyst, during these days of balances and reflections on what happened and what can come, who speaks nostalgically about the year that is ending. Although in a personal capacity there will be many who will have something good to tell, quite possibly 2022 will go down in history as a period of turbulence marked by war, economic imbalances and upward geopolitical risks.

There are those who see the events of the last twelve months as a true turning point in a world increasingly divided into blocks, which are viewed with increasing suspicion. So much so that the American diplomat richard haas believes that the term “international community” should be shelved, as evidenced by the global inability to deal with the threat of climate change in concert.

With such a preamble, expectations around the new calendar are modest, to say the least. In terms of security, there is nothing to suggest a quick and peaceful solution for Ukraine, while fears about China’s ambitions regarding Taiwan are growing. And as far as the economy is concerned, the calculations of the multilateral entities speak of a strong deceleration, beyond the fact that it is possible to put a tack on the inflationary upswing of recent times.

For these reasons, shocks will continue to be the order of the day. Even without considering truly catastrophic scenarios – such as Russia’s use of nuclear weapons if its army is cornered on the battlefield – aftershocks from recent earthquakes are unassailable.

(Be sure to read: ‘The clothing import tax is a setback’: Fenalco).

To cite one case, the interest rate hike it puts enormous pressure on emerging economies that borrowed more to mitigate the effects of the pandemic. The payment of these credits will end up taking a larger slice of the budgets, just when people in the most diverse latitudes ask for help, because they feel that the money they earn is not enough with rising prices.

Because of that, experts advise prudence and defensive strategies, which apply both at the individual level and at the national level. Put another way, it is about keeping your guard up, taking care of your resources and not taking false steps, given the certainty that the margin of tolerance regarding the mistakes made is on the decline.

The reprimand is applicable to Colombia, which closes the year with figures that cause envy in a good part of Latin America. Accepting that the successive increases in the family basket were said to be a real headache, no other country in the area –among the largest ones– showed a similar progress: between 2019 and 2022 the gross domestic product rose 11 percent in real terms , eight points more than the regional average.

However, the winds of slowdown will also blow here. Without going any further, his own Treasury spoke of a modest 1.3 percent of growth in 2023, when it unveiled the financial plan of the central government in the third week of December. If the aforementioned forecast is confirmed, it will be almost impossible to consolidate the improvements observed in employment statistics.

Knowing that a loss of speed is inexorable, there are elements that make the difference between a soft landing and a belly bump. At best, the slowdown would allow the expulsion to gradually return to the fold established by the Bank of the Republicwithout affecting the business climate or falling domestic demand.

Much of this depends on consumer confidence, whose performance shows a worrying evolution, according to the index that it builds Fedesarrollo every month based on surveys carried out in five capitals.

According to the entity, the value registered in November was at its most negative point since the days of the national strike in May 2021, and contrasts with a positive figure reached last June.

The reasons are related to both current economic conditions and expectations for the near future. In both records, the deterioration compared to the ratings of a year ago is evident.

Just as striking is that the assessment of the country for the people surveyed, which has traditionally shown figures in the red, reflects an additional and significant decline in the fourth quarter. Along with this, the assessment of the household situation –which normally registers a favorable net balance– also changed color, from black to red.

About, Camilo Herrerasignature Radar, emphasize that these are perceptions that can be influenced by factors such as the behavior of the exchange rate. Clearly, the level of the dollar – which reached its highest point in October – impacts the appetite when it comes to buying certain types of durable goods, such as household appliances.

The question remains as to whether this lower confidence will affect household consumption, which is the great engine of the Colombian economy. The same unknown appears in what corresponds to investment, around which there are also warning signs.

This is clear from the Business Opinion Survey, also from Fedesarrollo. Every three months the entity adds a special module that analyzes the economic and socio-political conditions for investment, which in November had a large setback in both categories compared to the August measurement. And this happens, despite the fact that the use of installed capacity in the case of industrialists reached its highest number since 2011.

Stability in the rules of the game emerges as a requirement, even if there is a certain margin of tolerance.
Conversely, too many question marks make a particular idea
freeze.

This highlights the contrast between subjective and objective measures. At first glance, this dichotomy is not serious, until the former begin to influence the latter.

Hence, in circumstances of announced tightness, messages aimed at giving peace of mind are so important. That is understood by the Ministry of Finance by showing that it keeps the affairs of its orbit under control, starting with public accounts.

However, the effort should not fall on a portfolio, but on the Government as a whole. Ultimately, it is about transmitting security in the midst of uncertainty, something that is achieved with clear and coherent messages.

In this regard, the current administration needs to amend the plan. At the beginning of the presidential term, there were mistakes, which at the time were explained as part of the startup of a team relatively inexperienced in matters of a national order.

After just under five months, the false starts persist. The statements by Jaime Dussán, president of Colpensiones, regarding the use that would supposedly be given to the money that Colombians have in the individual savings regime forced a new public intervention by José Antonio Ocampo to correct it.

However, the main element of disruption comes from the Casa de Nariño. At the point of trills, declarations and speeches, Gustavo Petro makes the atmosphere rare, whether criticizing the fourth-generation concessions, supporting the construction of a train that would link Buenaventura with Barranquilla or questioning well-being as an input to improve nutrition childish

Beyond the lack of merit of each acquired, the danger consists of calling into question irreplaceable sources of growth. Apart from the additions and subtractions on the purchasing power of households, there is the spirit of buying goods and services that imply constitutes a bet towards the future. In such a way, the psychology of the consumer ends up being what leads him to open the wallet, and if he looks at everything with a darker lens, due to the messages he receives, it will be more difficult for it to happen.

In principle, businessmen make colder and more informed analyzes when making investment decisions. These include, among many elements, an examination of the market and the possibility of supplying it better than the competition.

And the context in which it will operate is definitive. Stability in the rules of the game emerges as a requirement, even if there is a certain margin of tolerance. Conversely, too many question marks make a particular idea freeze.

According to the Joint Industrial Opinion Survey, carried out by Andi and several other unions, at the end of last September a 9 percent of the surveyed companies answered that they had decided to postpone productive investment projects. The number may seem small, but it is the highest since 2005, except for 2020, when the pandemic broke out.

Once again, a hint appears worth paying attention to. It is enough to remember that within the conceptual framework of Petro there is the vision of a fourth way in which the State defines the priorities and development is achieved based on reindustrialization and the increase in agricultural production, in charge of the private sector. But that last component, which is the one that closes the circle, depends on favorable conditions that more than one doubts.

As if the above were not enough, a cloud appears over the export sector. After having been hailed as the boldest deep integration scheme in Latin America, the Pacific Alliance – made up of Chile, Peru, Colombia and Mexico – was called into question after what happened with Pedro Castillo.

It is no exaggeration to say that official communication between Bogotá and Lima is almost cut off, while gabriel boric distance yourself from events andres manuel lopez obrador makes common cause with her Colombian colleague. The idea of ​​sitting down with the four current leaders in the same room is not viable, which complicates the development of economic ties.

All of the above entangles the other perspectives for the year that is beginning more, among other reasons, because there is nothing to suggest that the Casa de Nariño is going to change its score and even less because a slowdown is announced. In other times, the President of the Republic would try to encourage the public and invite businessmen to believe in the country and move on, but that does not seem to be the order of the day.

Like his predecessors, Gustavo Petro is packing his bags to travel –accompanied by his Ministers of Finance, Environment and Mines– to the summit of the World Economic Forum that will take place in the Swiss town of Davos starting next January 16. On paper, the occasion is unique to promote the arrival of capital to the country and make contact with the managers of the main multinationals.

Until the contrary is proven, the probability that something of this nature happens remains there. But it sounds more likely that the president will take the opportunity to denounce the failings of capitalism and reiterate the prophecy that the human race will disappear if climate change is not stopped.

However, he deserves the benefit of the doubt. Who takes away from the fact that on his return to Colombia he understands that an economy that emerges gracefully from the coming downpour would help the success of his government, it will give more weight to pragmatism than to ideology.

That would indeed be a unique way of putting into practice the well-known saying “new year, new life”, while driving away the ghost of a paralysis from which no one would win. Otherwise, Colombians would end up missing that 2022, of such an ungrateful recording in the rest of the world.