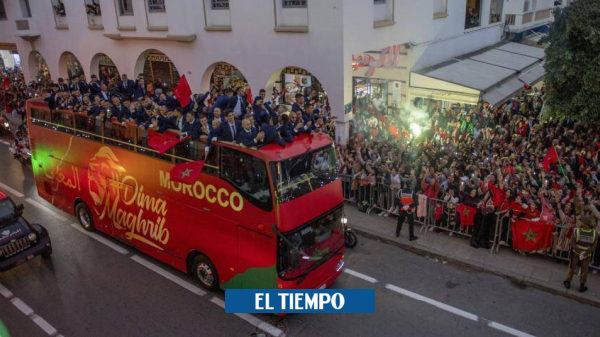 share a skewer and a non-alcoholic beer with my friend Akram S.., a neighbor for more than a decade in the Playa Sol neighborhood, where the Puerto de Mazarrón mosque is located in Murcia (Spain). The conversation focuses on football and the way in which the Maghrebis, in general, and the Moroccans in particular, celebrated the succession of victories of the Moroccan national team against Spain and Portugal, which meant the elimination of these two powerful teams in the World Cup held in Qatar.

«Can you imagine —he tells me— the tourist roundabout from which the tracks lead to the incomparable beaches of the Bolnuevo, Alamillo and La Azohía, on the Costa Cálida Spain (Murcia), totally filled with immigrants from many nations living our country, embracing each other, sharing the enormous joy. There were the Colombians, the Ecuadorians, the Venezuelans, all the Africans, the Asians and our compatriots of multiple ethnic groups, crying with happiness, with no differences between them.

«We raised flags, photographs of Bounou, who is known as a Sevilla goalkeeper; of Achraf Hakimi, our star at Paris Saint-Germain; Delaware mazraoui, who plays for Bayern Munich. Our selection has men in Turkey, Italy, Belgium and Hakim Ziech at Chelsea in England.

Morocco wore 36 years without passing the group stage of a World Cup. Today we make up the best team in Africa and, given our biotype, we are accurate headers and we make a synthesis between height, speed and control of the ball. We have the technical director Walid Regragui, with a great career as a player in France and Spain. Organized, motivating, he exalts the attributes of our people and our spirit in overcoming difficulties. Man by man we were very good, but, in terms of team play, he was described as the best in the tournament. That is a treasure and a great message for our society.

(It might interest you: They accuse another man of having betrayed Shakira; Piqué would have influenced).

«I frequently hear voices similar to those of Latin Americans in my country. We have natural resources and human talent, we suffer —inexplicably— a low estimate of our own potential. We speak very good French, but we are slow to assume the services of BPO and after-sales in la francophonie, We are excellent farmers and we have the fertilizers that today the world demands as the first producers of phosphates, however, we have not yet taken full advantage of these comparative advantages.

«This football phenomenon has filled us with confidence and is a fundamental reinforcement for a national strategy for productive development.

«Truly this national soccer team
has shown us
what can we be
a nation and achieve higher goals
of coexistence and progress».

«We had hours of dreaming, we have felt and —somehow— believed that we can be a united nation from diversity and multi-ethnicity,» he tells me optimistically akram, whose name means generosity in Arabic. This national team has truly shown us that we can be a nation and achieve higher goals of coexistence and progress.»

Akram leaves aside the political judgments and the emphasis on differences. It seems to him that Morocco is improving and that there are perceptible changes. The subject is as long as it is wide, he tells me, but this bell could place us on the path of the possible.

(Don’t stop reading: Luis Díaz and Liverpool: new year and same problem at the end of 2022).

Of all the problems of magnitude that are recognized in the north of AfricaThe identity issue is the one that appears as the most pressing issue, the one that requires greater analytical depth, political serenity and better historical, cultural and linguistic contextualization for its understanding.

The Berbers are a group of peoples who live in North Africa, from the deserts of Egypt to the Atlantic Ocean and from the coasts of the Mediterranean to the interior of the Sahara desert. Two ethnic groups share vast territories with their respective cultures; the Berber and the Arab. While Arabic enjoys the status of official language of the States in the area, Berber is relegated to a marginal condition that does not correspond to the demographic reality. The political space is filled with intersections and manipulations between ethnic issues and the problem figures in the first places among the unresolved conflicts of the national question.

In his works on social identity, amartya sen it guides us towards a broader perspective and less conditioned by traditional components of the concept. This in the cultural, religious and idiosyncratic planes that, being very important, do not base the roundness of the concept in isolation and can lead to misunderstandings or exclusive perceptions. For the Nobel Prize winner in economics and a great sociocultural thinker, Identity is plural, not univocal, chosen, not inherited or barely discovered, and it is generated in coexistence with other identities, not confronted.

(It might interest you: What will be the bet of Rodolfo, ‘Fico’ and Fajardo in the elections?).

Professor Amartya Sen reminds us in studies on the way the concept evolves that, currently, some identities are built and reinforced, but others are also weakened, such as those that fail in the workplace.

Social identity, as seen by Sen, refers us to fundamental values ​​such as freedom and responsibility. And to their interrelation, since responsibility towards others (positive freedom) often gives way to the impetus of freedom as an individual matter in its negative dimension, referred to as non-interference.

For Amartya Sen, the key lies in the deepening of democracy at all levels. As he affirms, it is the democratic model that guarantees to a greater extent public debates, criticism and discussion, being vital to generate argued options, functioning as a vehicle for communication of social identities.

The Arabic, in morocco and algeria, is more related to the urban and to the powers established after the formal independence. Arabic appears as the protagonist of an ‘Orientalizing’ culture, often presented exclusively and extensively to the entire population.

In other territories, the Berber, eminently rural and with ancestral reminiscences, loses ground in appearance, but reaches meritorious expressions of long-suffering and determination. The dominance of Islam in its Sunni variant prevents the religious question from becoming another dividing factor.

For internationals, the statistics show high levels of imprecision. In the case of Morocco, a weighting between statistical sources would assign to the Berber-speaking group a quota that is around magnitudes close to 50 percent of the population.

What makes the subject a great object of ethnographic and prospective studies is that the indisputable element of difference between the populations of the Maghreb is strictly linguistic. There are no two critically demarcatable ethnic groups, one Arab and the other Berber.

The Berber-speaking or Arabic-speaking Maghrebi population is of Berber origin. the maghreb It has lived through a process of linguistic Arabization for several centuries, particularly accelerated during the last decades. A long historical perspective does not give rise to exclusivism or hegemony. An extended democratic ethos has facilitated the united and harmonious survival of Morocco.

With respect for the ancestors, until dignity becomes customary to say it in the Colombian colloquial language of our days. But leaving a good collection of both the Berber radicalisms and the hegemonisms associated with the Arab with a clear urban emphasis.

(See: Bruce Springsteen celebrates half a century of his first album).

«Today, the Maghreb is an economic force with high potential in terms of business and relations with Colombia, and it is what the country needs.»

In days, as the team that ranked fourth in the World Cup exploited, Amartya Sen whispers into our ears to vindicate a denser concept of identity as a consequence of historical processes. Today the Maghreb speaks several languages, as befits a plural culture with an identity that escapes the encirclement of official ideologies in the North African subregions. Today the Maghreb is an economic force with high potential in terms of business and relations with Colombia.

Get to know Morocco better

And that is what this Latin American country wants and needs. Morocco is a magnificent example and a socioeconomic synergistic effect for our country. Your industry adds more value than ours and has a greater share of GDP. It has transformed its agricultural offer and today it is a major exporter of tangerines, olives and olive oil, tomatoes, melons, figs, chili peppers, sardines and cereals. Their 37.5 million of inhabitants are consumers of coffee, wood, oil derivatives and can articulate their logistics in our export of avocados, cocoa and tropical fruits.

In terms of cooperation, a priority sector would be tourism. With a territory equivalent to just over a third of Colombia, Morocco receives nearly 13 million visitor models per year, of which 35 percent recover seas, archaeological treasures and stretches of low desert for integration with communities. as the current President of the Colombians has formulated it in his vision.

(You might be interested in: ‘The Kings of the World’, Laura Mora’s film, is already on Netflix).

Colombia needs to know Morocco better in its different cultural influxes. Our academy faces a challenge.

Regardless of the geopolitical problems regarding the Occidental Sahara and from the foreign policy decisions adopted by the Colombian Government, matters that exceed the scope of this report, it is clear that our universities must open study, research and exchange units, as North American higher education institutions have done.

And, in our international proclamation for peace, relations between governments, support for the deepening of democracy and multi-ethnic convergence, Colombia can –with all due respect–, as it also corresponds to us, support such processes by dribbling extremism .