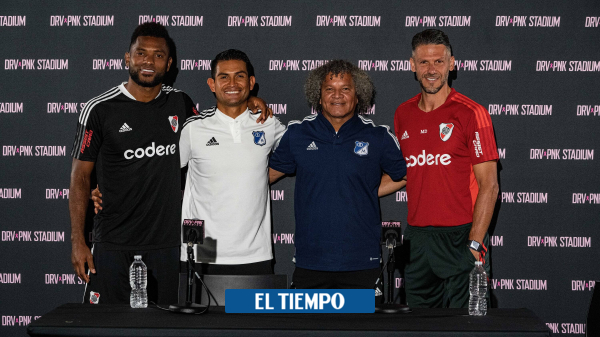 millionaires will play the second friendly of 2023 against Silver river this Saturday, at 7 pm, in Fort Lauderdale (United States). The game will be broadcast to Colombia by ESPN and Star+.

The cast led by alberto gamero It comes from drawing 2-2 with Hertha Berlin, in a match played at the Osceola Heritage Park in Kissimmee (Florida, USA) last Wednesday.

The samarium counselor will have the opportunity, once again, to line up a reinforcement for this season, Daniel Giraldo, since neither Fernando Uribe nor Leonardo Castro traveled to the United States.

Jorge Arias, the latest addition, is not with the group, as he was announced hours before the engagement with the German cast, in a good presentation.

«This match is going to help both of us a lot. Playing with River is always a pleasure and also a desire for the players and for us as a coaching staff,» Gamero said.

It is very possible that Gamero repeats the roster from last game with Mackalister Silva, Daniel Cataño and Daniel Ruiz in the middle, leaving Luis Carlos Ruiz in the lead.

«We hope to be up to the game, it is one of the best teams in recent times. We are going to try to compete well and thinking that we are going to face two important tournaments. Hopefully we will make a good presentation,» added Gamero.

River Plate comes from defeating Monterrey 1-0, also in a friendly game, with a goal from Lucas Beltrán.

“We are halfway there, in the last part before the start, and these games help us to adjust the lines”, said DT Martín Demichelis.