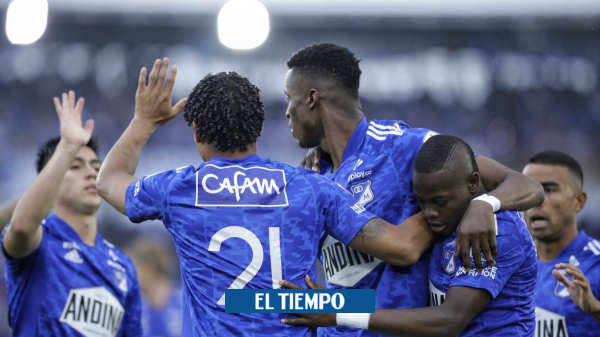 carlos andres gomezthe young promise that stood out last year with Millonarios, will not play in 2023 with the Bogota team.

As reported by Millonarios on the afternoon of this Tuesday, the winger was transferred to Real Salt Lakefrom United States.

(You can read: The heartbreaking last goodbye of the father of a karate fighter executed by hanging in Iran).

Millonarios FC informs that striker Carlos Andrés Gómez has been transferred to @realsaltlake of the MLS.

We thank Andrés for his professionalism and wish him success in his career. ⚽️🔵👏 pic.twitter.com/I63vwSBimv

Minutes before the announcement, the North American team had already carried out a kind of expectation campaign with a series of messages on their Twitter account.

i might really go for an andres mint right now

Until now, according to press reports, Gómez ended up in Major League Soccer (MLS) for a value of almost five million dollarscorresponding to 80 percent of their sports rights.

Salt Lake, champion of the MLS Cup in 2009, has links with European teams, as it is part of the same investment group of clubs such as Augsburg, from Germany; the Crystal Palace, from England; and Alcorcón, from Spain.

In its official part, the Utah state team did not provide details of the exact amount of the operation, but stressed that it was «With a transfer registration fee». Gómez’s contract, according to the club, runs until 2027.

“Andrés is a player who has risen rapidly to the top of our target list in recent months and we are very pleased to be able to finalize his acquisition. His athleticism and creativity will be a welcome addition to our stable of attacking players. We look forward to training camp shortly and integrating him into our group as we fight on multiple fronts in 2023.»stated Elliot Fall, general manager of Real Salt Lake.

Meanwhile, in Millonarios there is a space to fill in the headline, because today there is not a man of weight to play in Gómez’s position.