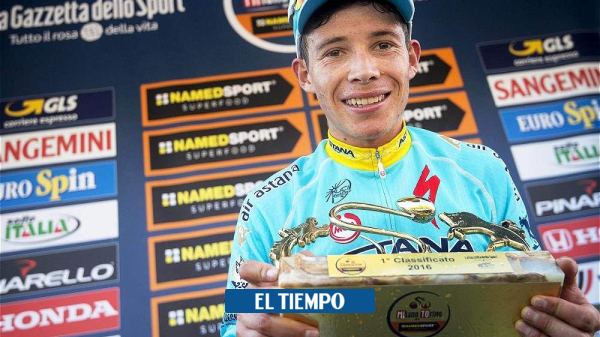 After his contract with the Astana team was terminated, for apparently being involved in a scandal of alleged drug trafficking, the Boyacá cyclist Miguel Ángel ‘Supermán’ López will run again in Colombia.

The cyclist from Pesca, Boyacá, built with the Antioquia team ‘Team Medellín’, led by José Julián Velásquez and became the great hire of a Colombian team for the 2023 season.

López’s first race, and already confirmed by the team, will be the Vuelta
a saint johnthat will be held in Argentine territory between January 22 and 29.

(We recommend: Cabal and Farah, after their black year: ‘We know how to win tournaments and we are going to look for them’).

“I want to thank Team Medellín for their trust, for giving me this beautiful
opportunity, to the manager «goat» for trusting me and being able to make me be
sharing with all of you and giving the best of me in this 2023.
I also want to thank the Mayor of Medellín for their support and the truth is
that we are going to enjoy this 2023”expressed Miguel Ángel López, runner of the
Medellin EPM Team.

After the Tour of San Juan, López will contest the championships
Nationals that will be held in Bucaramanga. There he will test against the clock
together with Walter Vargas and will run the road test.

“It has been a difficult year. I ran out of a team almost in 2023 because it was missing
It’s not long before the end of the year and the teams are full, with their payrolls and not
there was no space. I believe that this team (Team Medellín EPM) gave me that
confidence, that great opportunity to be able to continue a year 2023 passing it,
making a transition, enjoying the team, the great payroll there is, the
good material, spend this year and enjoy the calendar that they can do ”,
concluded Miguel Ángel López.

We are delighted to make the linking of @supermanlopezN the team for this season. How proud that you wear our colors and represent Medellín for Colombia and the world.

Welcome champion, MEDELLÍN will always be your home 🔝 pic.twitter.com/4LwQdoIJuP

SPORT
*With information from the Team Medellín press office