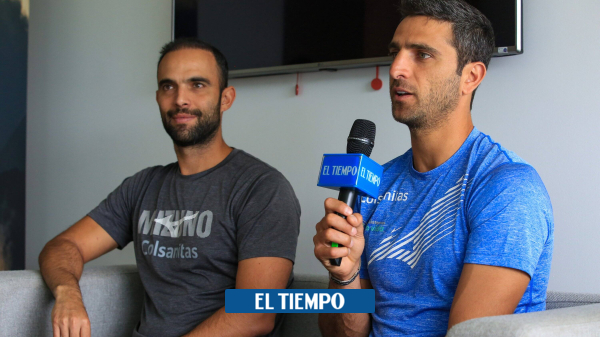 The objective that doubles players have Juan Sebastian Cabal. Y Roberto Farah for this year there is only one: turn the page. After 425 days without abilities, in which they showed very outstanding moments in the game during the Grand Slams, but not in smaller tournaments, the people from Cali trust their to return to the top of the doubles ranking that came to lead in 2019.

(His coach speaks: Will Cabal and Farah win a ‘Grand Slam’ again? This is what their new coach says).

With the purpose of breaking their worst drought in the last eight years, and supported their work with the Argentine tennis player Mariano Hood, Cabal and Farah are clear that they cannot fail in the supertiebreak, the tiebreaker phase in which they have let eight escape of his last one final times.

With that topic on the table, 2022 in the rearview mirror and 2023 in the panoramic, Cabal and Farah sat down to talk with EL TIEMPO. In the talk, a feeling: they have not given and will not give anything for lost.

Last season was terminated earlier than expected due to some muscular problems… how are you?

Farah: Yes… and thank God we are fine. We had a couple of weeks off and then a few weeks of training and everything is fine, that was the good thing about ending the year early, it gave us a breather to be ready for 2023.

The great novelty of 2022 was that they improved to work alongside Mariano Hood. How has it impacted his career?

Cabal: Mariano has had a very positive impact on us. He is a great coach, but he is even a better person, he always maintains a balanced and very friendly team environment. Despite the fact that 2022 was our first year and it was full of ups and downs, Mariano always kept his spirits, head and work ethic up. He told us all the time that we could not give up and that speaks highly of him. The truth is that we feel very good with Mariano.

You say it… your 2022 was up and down, there were very good games, but others perhaps not so much. What do you think that happened?

Farah: Yes, unfortunately it was like that, ups and downs. If something left us last year, it was the desire to continue working hard and move forward in 2023. I think that within us is the competitive soul and the thirst to win, so there is no other choice but to do so. Last season we had sugar and also salt, the year was a bit bittersweet, so we can only look for the sweetness of victory again and work for it.

In the end there were no titles…

Farah: No, but we played two Grand Slam finals and two semifinals, which is not little, you have to keep that in mind.

Cabal and Farah’s deficit with the supertiebreaks

In the midst of this situation, what has happened to them with the supertiebreaks shines. The balance is very negative…

Cabal: Phew, last year we lost many key matches in the supertiebreak. It is tremendous, as in 50% or 60% we had a matchpoint or we were very close to winning and it did not happen to us. That’s when one assesses and says: ‘Well, calm down, a year that was not given to us, we have been giving it for many years.’ So you have to have the necessary maturity, it’s not that we were doing things wrong, it’s not that we didn’t train, that we were letting it go… we were always looking for it, we did the same thing that we did all the previous years, but it didn’t happen… Now the only thing left to do is accept it and continue working because each year is a new story and you have to look for the percentage to be as good as in previous years.

Have you done anything different to improve your performance in those tiebreaker phases?

Farah: Beeeh, I don’t think so. In the end, it’s a point like any other, we try to be aggressive, we try to go out and win the opening game, and well… in 2022, for example, I remember several match points that I don’t even tell you about the way we lost them. Now, obviously, the other tennis players also play. In Rio de Janeiro, (Lorenzo) Sonego hit a backhand from far back and put it on the line, in Acapulco Feliciano López hit the net and went over our… in the end, how does that work? The only thing left is to keep starting, keep believing and keep betting on each of the possibilities that arise. Obviously, perhaps by going down, one loses confidence and already enters the next supertiebreak as random, as more in a hurry for wanting to win from one, whatever, and you come back and lose, so it’s difficult… in Washington we also had matchpoint and then we lost

It’s been a bit complicated…

Farah: Yes, but in the end the best is required in what one can operate, control what one can control, and hopefully start off on the right foot this year in the supertiebreaks that we have to play.

Cabal: Being healthy all year round, having a level, a good work ethic, giving everything and not changing our attitude. We know how to win tournaments and we are going to look for them.
*This interview was conducted before the first match that Juan Sebastián Cabal and Robert Farah played in 2023. They lost in the early hours of Friday, in a supertiebreak, in the quarterfinals of the ATP 250 in Adelaide.