Juan Fernando Quintero: this is how his arrival at Junior was unlocked, analysis – Colombian Soccer – Sports 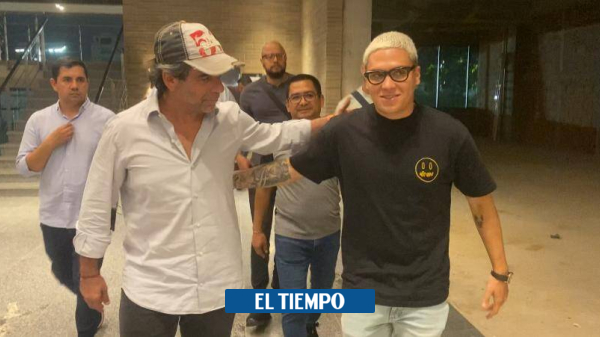 Soccer has changed. In social networks, trends, bombardments of constant information, what today is real tomorrow can become a resounding lie, which had already been replicated thousands of times throughout the world via the Internet. And many people take advantage of that factor to promote their product. In less than 24 hours, the slam to Juan Fernando Quintero in it Junior from Barranquilla it became a reception with everything and throne.

In Barranquilla they decided that Quintero’s novel, which seemed to have an end point at 5:57 in the afternoon on Thursday with the player’s announcement that he was not going to Junior, had an epitaph with a happy ending for the shark fans.

Curiously, the one who slipped the news was not the club, nor a journalist, but a Junior player, another of the emblematic of the squad, Carlos Bacca. At 11:39 a.m. yesterday, the striker uploaded a photo of a WhatsApp chat with Juan Fernando Quintero, with a message that at the time seemed recorded: «With open arms dad @JuniorClubSA.»

To get to that moment, they spent several hours of lamentations on social networks. First, the one of Alexander Char, former mayor of Barranquilla and one of the commanding voices in Junior: “I am very, very sad because despite the fact that I did everything in my power, this time I did not succeed. @juanferquinte10 knows it. The decisions are not made by me alone, ”he wrote 27 minutes after Quintero announced his refusal.

So, how was the signing of Quintero prepared, which seemed ruled out on Thursday? One of the obstacles, and this was made clear by Alejandro Char from the first meeting with the player, last Friday, in a restaurant in Barranquilla, was the economic part. It was leaked that Juanfer was going to have the highest salary in the history of Colombian soccer, close to a billion pesos a month, a figure with which Junior intended to match the offer that Quintero had from flamingo, from Brazil

Junior and Quintero gave up

According to journalist Fabio Poveda Ruiz, Quintero’s salary will be below that figure. “Juanfer is one of the best paid, but not the one that has earned the most in history. In fact, Miguel Ángel Borja won much more in Junior. Borja’s contract was higher than what Juanfer is going to earn. Carlos Bacca… I think they should be even, ”he assured on Blu Radio.

But to reach that point, according to Poveda himself, Quintero had to lower his claims. “Juan Fernando spoke directly with Fuad Char. One more piece of information and the reason why it had fallen, which we had said since Tuesday, is that one of the main obstacles was that the members did not agree due to the high price, but with this significant drop, Fuad He communicated it to his brother, and with that figure they told him: ‘Go ahead’”, the communicator assured.

Quintero initially arrives for one year, and the money he will receive may increase for goals met. Junior has this year, in addition to the League and the Colombia Cup, participation in the Copa Sudamericana, in which he will play against Tolima in the first instance, in a single match, to seek a place in the group stage.

Was the downturn in the negotiation, which even caused Quintero to argue with two journalists, Carlos Antonio Vélez and Samuel Vargas, premeditated? Bacca made a live broadcast on Instagram with Quintero, and the latter left a sentence in the air: “It was five or six days of great uncertainty, but here we are. They killed me yesterday, but it was all part of the plan, everything went well, ”he said.

Social networks went from memes mocking Junior to euphoric messages from fans, managers and even journalists. And Junior, on his Instagram account, put a virtual throne for Quintero to receive it.

One of the worries about Quintero was the issue of medical exams. Last year, more than 15 players had physical problems in the Junior.

For this reason, one of the most important signings of the Junior for 2023 was the doctor Luis Javier Fernández, who has been perfect with the physical tests. Four players who wanted to reach Barranquilla had to take the briefcase and turn around for this reason: Rafael Pérez, Marlon Torres, Germán Gutiérrez and the Venezuelan Jesús Hernández.

However, this Friday, unofficially, it was learned that Quintero, who took the tests in Medellín, passed them without a problem. Junior already celebrates his.