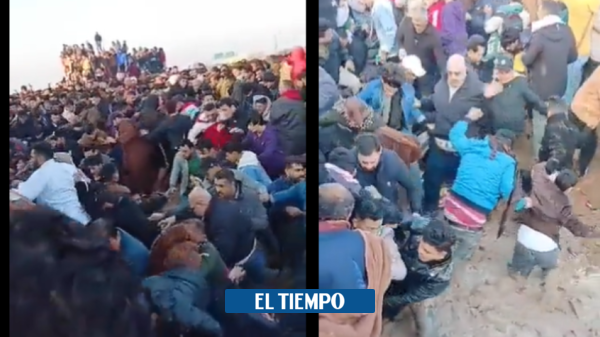 at least one person died and sixty others were injured in a stampede in the mediations of the Basra stadium where the final of the Gulf Cup between the teams of Iraq and Oman will be played this Thursday, according to the official Iraqi news agency, INA.

For Jeremy Wisten there is mourning in English football.

«The stampede between fans in the vicinity of the Yezá al Najla stadium in the governorate of Basra (southeastern Iraq) causing the death of one person and injuring 60,» said INA, citing medical sources, and affirming that «several of The wounded are serious.»

Iraqi Prime Minister Mohamed Shia al Sudani traveled to Basra after the incident, where he held a meeting with several members of the Cabinet, in which the governor of that region, located about 450 kilometers south of Baghdad, was present, according to a report. statement from his press office. S

According to police sources and witnesses, tens of thousands of people gathered since Wednesday night in the mediations of the stadium to attend the match in the selection of their country and Oman, in the final of the Gulf Cup, which will be played in the afternoon. The crowd has been trying since this morning to get closer to the stadium entrances.

The Interior Ministry called fans in a statement to «abide by the rules and instructions» of the authorities and recorded that «the citizens of Basra should not go to the stadium unless they have tickets for the game.»

«The number of fans is very large and we do not want there to be cases of suffocation,» said the statement from the aforementioned department, and invited fans who do not have tickets to watch the game through the screens placed in public places.

(Also: «I was going to die»: Manga Escobar, convicted of sexual abuse, breaks the silence).

This is the second incident related to the Gulf Cup, in which eight Arab teams participated, after last Monday a traffic accident caused the death of seven fans and injured another thirty, when they were going to attend the match between their Selection and Qatar, in semifinals (2-1)