Falcao will remarry: in a romantic video he asked his wife for a hand – International Football – Sports 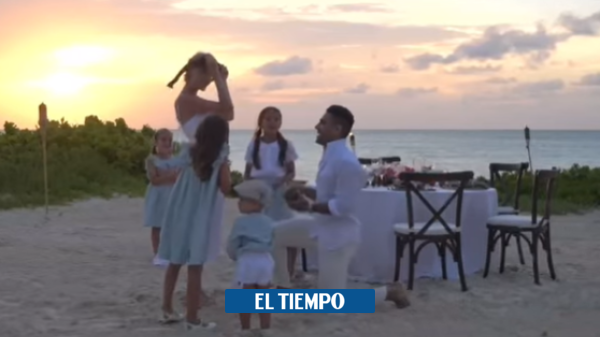 The ‘Tiger’ did it again. The followers do not stop highlighting the love that moves the scorer.

Falcao García did it again. The top scorer of the Colombian National Team woke up this Friday with a new wave of support for his way of being. On this occasion, the ‘Tiger’, loved by millions of people, received the affection of his followers for an emotional unpublished recording: that of his last marriage proposal.

In a publication on her social networks, the singer Lorelei Tarón, Falcao’s wife for more than a decade, revealed how the Rayo Vallecano striker asked her to marry him once again.

In the clip of the moment, the woman is seen walking blindfolded along the beach, in the company of her children.

After some good steps set by live musicians, Tarón got to where Falcao was waiting for her.

After removing the bandage, the ‘Tiger’ knelt down and showed him the ring.

Thus, Falcao asked her to marry him again, in a heartfelt renewal of vows.

(Furthermore: Fifa pronounces itself for the naming of the ‘Rey Pelé’ stadium in Colombia).

The recording, shared in the last few hours, corresponds to an episode from last year, when the couple celebrated their 15th anniversary of marriage.

In 2018, they had already renewed their vows.