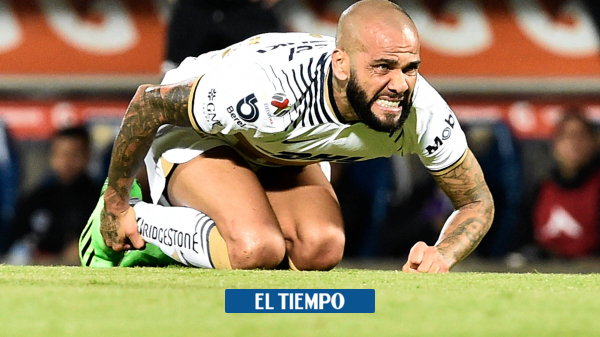 Daniel AlvesAccused by a woman of having raped her in a nightclub on the night of December 30, he was transferred this Monday to a prison with smaller modules near Barcelona, ​​​​to «guarantee security and normal coexistence» in the center, sources penitentiary source.

Although his lawyer was expected to present a ‘habeas corpus’, this Monday no appeal came before the judge in the case. In fact, what was known were new statements by the complainant, who would be a 23-year-old girl, as reported by the Spanish press.

«I resisted, but he was much stronger than me»said the woman in the new content revealed by ‘La Vanguardia’, a Catalan newspaper, and quoted by other media.

‘I am very afraid and I feel very ashamed’

The woman who accuses Dani Alves of rape assured that the player locked her in the bathroom.

«I didn’t know what was behind that door, I thought there would be another VIP area,» The Spanish media ‘AS’ picks up what the woman said about that moment.

Then, according to her, the player sat on the toilet and forced her to have sex with him. «Just by going in, I told her that she wanted me to leave, and she told me that she couldn’t,» she reads in the report of the complainant’s testimony, according to ‘AS’.

«I insisted that I wanted to leave, but my dress went up»added the complainant.

The athlete would also have thrown her to the ground and forced her to perform oral sex on him. The woman would have tried to resist and for that reason she would have been allegedly attacked.

«He started slapping me,» the woman said.

Later, Dani Alves would have penetrated her by force before they both left the cabin, according to the complaint.

«I resisted, but he was much stronger than me,» commented the victim, who later said that Alves told him that he could not leave on time.

“I am very afraid and I feel very ashamed for everything that has happened and for having to see myself like this”concluded the complainant in her testimony.

This collects @the newspaper on the statement of the complainant of Dani Alves pic.twitter.com/0frbDV4x4X

The contradictions of Alves

After filing the complaint against him on January 2, Alves stated in a chat with ‘Antena 3’, from Spain, that he had «never» seen the complainant. Then, according to ‘TV3’, from Catalonia, Alves assured the judge in his case that the young woman «pounced» on him in the bathroom of the ‘Sutton’ nightclub, and that her coincidence in the place was scarce. seconds. However, as revealed by the Catalan newspaper El Periódico, Alves changed his version in his last testimony in court and admitted to having had sexual relations with the complainant. However, he stated that they were «agreed upon» and that there was no abuse.

In the latest report from ‘El Periódico’ it is also said that the «meeting» that Alves would have measured in seconds would have really been fifteen minutes, according to the cameras of the place.

In the recordings, which have been analyzed by the witnesses – among whom would be the complainant’s friends and the waiter who served the group on that occasion – there would be no coincidences «or with the version that he sent to television to say that the young woman lied and that he had met her by chance in the bathroom of the facts, nor the one that he maintained in the Investigating Court and that does not respond to the sequence of events captured by the cameras either, «says the medium in question.

Likewise, according to the Brazilian reporter Marcelo Bechler, from TNT Sports, who quotes without identifying a source close to Alves, the winger «initially lied because he is married and tried to hide an infidelity.» In fact, according to Bechler, «the source experienced Joana Sanz (his wife) as the ‘ex-wife’ of Daniel Alves.» Reason for which other means assure that he ended his relationship with the Spanish model.