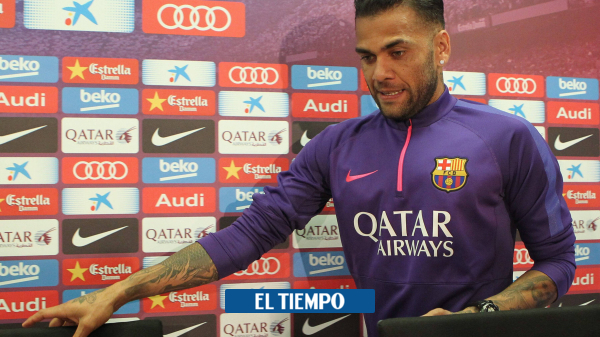 the brazilian soccer player Dani Alves was arrested this Friday in Barcelona after voluntarily going to a police station to answer for an alleged sexual assaultinformation to AFP sources from the Catalan regional police.

(It may interest you: Dani Alves defends himself against a harsh accusation of sexual assault: «I was dancing»)

«He is detained» and is being transferred to the courts of the City of Justice of Barcelona so that a statement is taken for this alleged sexual assault on a woman in a discotheque in Barcelona at the end of Decemberexplained a source from the Mossos d’Esquadra, the Catalan police.

The former fc barcelona player, 39 years oldHe reacted to a police summons and went to the Barcelona police station in Les Corts, precisely near the Camp Nou stadium, after which he was arrested, the police source reported.

(In addition: Piqué forgets Shakira and leaves Spain without Clara Chía: ‘perlita’ of the former player)

On January 2, the Catalan police received a complaint from a woman who claimed to have suffered unwanted touching by the footballerpolice sources explained to AFP. The events would have occurred in a nightclub in Barcelona on the night of December 30 to 31according to the local press.

The footballer was transferred to the courts of the City of Justice in Barcelona for a statement to be taken.

Alves found himself on vacation in the city before rejoining the Pumas from Mexico after having played in the World Cup in Qatar with the Brazilian team, which fell in the quarterfinals. In a message broadcast to Antena 3 television on January 5,
Alves denies the facts. «I don’t know her, I never saw her,» he said of the complainant.

(Also: Matías Mier, with everything: he introduced his girlfriend to his parents, after Melissa Martínez)

«I would like to deny everything«he added, confirming that he was in the club «enjoying» but «without invading the space of others».

– Mourning: the ‘queen of hiking’ died, after a fall of more than 200 meters, video

– Shakira and Piqué: composer of the song «he released his tongue» and gave it away, video