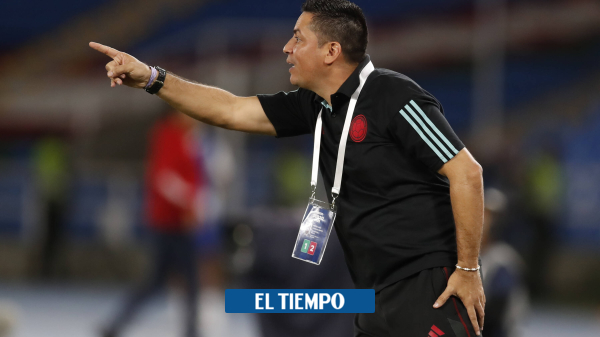 A flywheel doublet Oscar Cortesde Millonarios, revived Colombia this Saturday and allowed them to win a comeback 2-1 on the second day of Group A of the South American Sub’20 Championship to Peru, which sinks to the bottom of the standings without points after linking its second fall.

The team of Hector Cardenas He did not show his best version but preceded to take the three points from the Pascual Guerrero de Cali stadium to share the leadership of the area with Paraguay, who appeared before the rookie Argentina by winning 2-1.

At the end of the match, the coach of the National Team analyzed the team’s performance in this important victory.

«The exhaustion of the athletes in each game and more when you have a proposal in which you try to go to the front, look for spaces, imbalance, compete with intensity, everyone is capable of competing,» Cárdenas told Win Sports.

The coach was consulted about the changes he made for this game compared to the first game against Paraguay.

«Everyone has prepared for their moment, they are patient, they know what they are looking for, there is a strategic planning according to the rival. Those who entered and those who closed give it peace of mind and character and identity that we are going to improve.»

He also referred to the fact of starting to lose in the two games that go to the South American.

«It is part of the job, the winning mentality, the character of this team. The games have never been easy, we have been below the score, but with conviction we unite and we know that we can turn it around.»

Finally, he left an impression regarding next Wednesday’s match against Brazil.

«Now it’s time to recover this day and think about Brazil, it will be a nice match for both of us.»