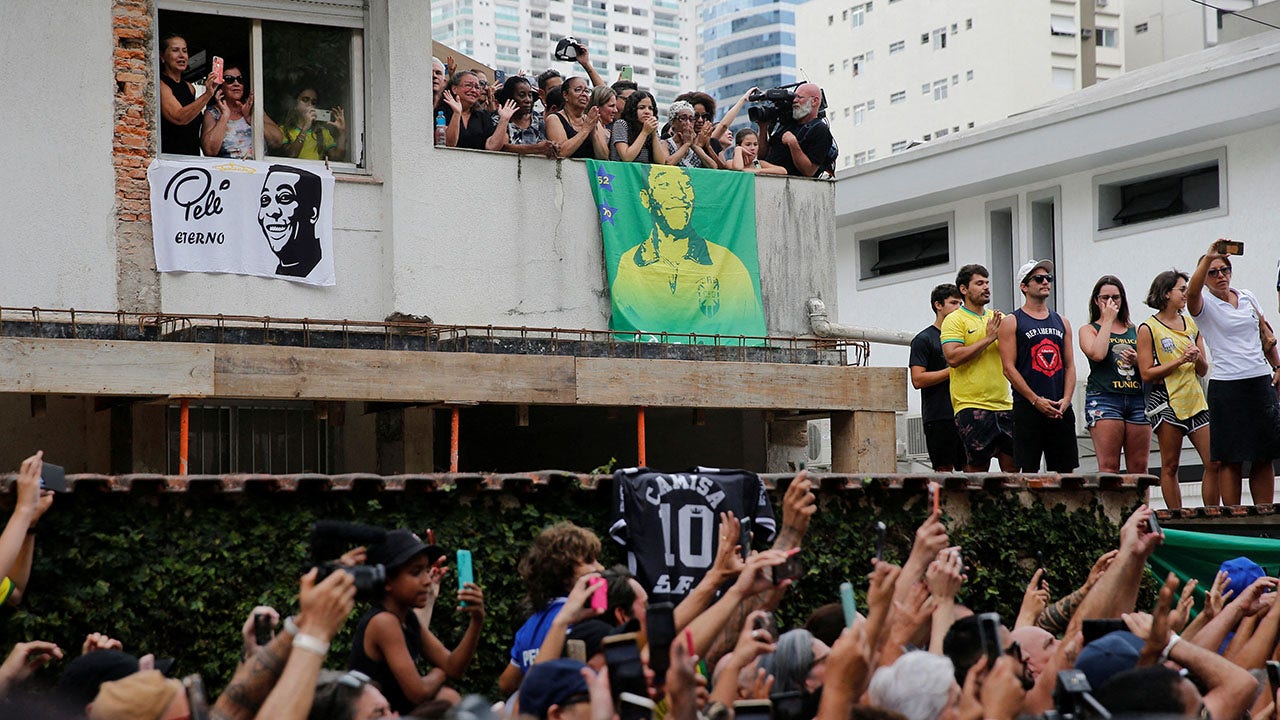 Tens of thousands of mourners, from fans to dignitaries, including Brazilian President Luiz Inácio Lula da Silva, visited Santos to pay their last respects to the soccer legend.

Pelé’s coffin was transported by firefighters from the Vila Belmiro stadium to his last resting place.

The procession passed the home of Pele’s 100-year-old mother.

Pele’s sister Maria Lucia Nascimento, family and friends say goodbye to Brazilian soccer legend Pele as his coffin is carried by the fire department past the home of his mother, Celeste Arantes.
(REUTERS/Diego Vara)

Pelé’s mother, Celeste Arantes, did not make an appearance, but her sister, María Lucía, was seen waving from a balcony. Her mother celebrated her 100th birthday in November at the start of the 2022 World Cup.

FIFA President Gianni Infantino also visited Brazil to bid farewell to one of the greatest footballers of all time.

A funeral procession began at the Vila Belmiro stadium where his coffin had been placed with a grandstand draped in a banner reading «Long live the King,» Pelé’s nickname during his playing days.

Some of the highlights of Pelé’s career took place on the pitch of the Vila Belmiro stadium. The stadium was festooned with Brazilian flags and Pele’s number 10 jerseys.

NEYMAR JR., CRISTIANO RONALDO BETWEEN MOURNINGS FOR THE LOSS OF THE BRAZILIAN SOCCER PLAYER PELÉ

Fans waited up to three hours to see the coffin inside the stadium in the middle of the field.

Fans line the street as the coffin of Brazilian soccer legend Pele is carried by the fire department from the Vila Belmiro stadium of his former club Santos.
(REUTERS/Diego Vara)

«Pelé is incomparable as a footballer and as a human being,» Lula said shortly after arriving at the stadium.

Pele’s name became synonymous with the sport of soccer. He played for Santos from 1956 to 1974 and was known as the «King of Soccer.»

After attending the memorial on Monday, FIFA’s Infantino said he would ask soccer associations in every country in the world to name a stadium after Pelé.

«The most important thing in any case is to pay tribute to King Pelé, and while I have humbly suggested that in our 211 member associations at least one football stadium or venue bear his name, we will set an example by setting the pitch at our headquarters.» the name ‘Estádio Pelé’, said Infantino.

Brazilian television was suspended to ensure that only the procession was broadcast at that time, similar to the Argentine media’s treatment of the death of Diego Maradona.

In the photo, a Santos fan wearing a Pelé jersey as Pelé’s coffin is transported by the fire department.
(REUTERS/Ueslei Marcelino)

In his heyday, Pelé was arguably the best known athlete in the world. He met with world leaders, from presidents to queens. At one point, a civil war in Nigeria was temporarily put on hold to keep an eye on Pele.

A diverse crowd came from far and wide to take a look at Pelé’s coffin on Tuesday. Many of the mourners may have never seen Pelé play, but they wanted to say goodbye to the legendary athlete.