Andi: How to maintain and generate employment? The great challenge for 2023 – Sectors – Economy 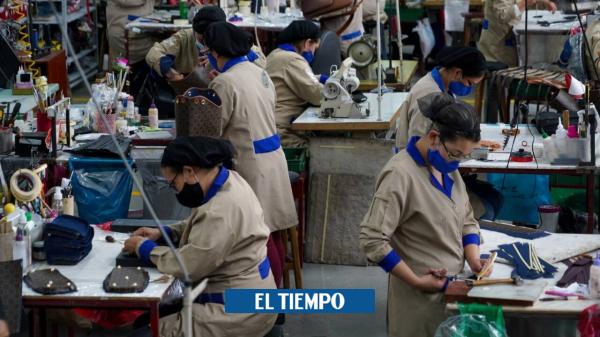 We ended 2022 in Colombia with a dynamic economy that slowed down one of the highest growth rates on the planet in a turbulent and rarefied environment. The question now is: what will 2023 bring? What can we do as a country, businessmen and society to generate more employmentachieve greater economic and social development and for this year to be the beginning of a better future?

(Also read: This is how you can take advantage of record inflation and high interest rates)

Uncertainty, volatile markets, the threat of a slowdown and high inflation in 2022 in the world will not continue in 2023, but some will even worsen, so it is inevitable that this will impact the country’s growth. So the projections of gross domestic product (GDP) growth for this year they range between 0.5 and 2.2 percent. A low number in any case. At Andi we project this figure to be around 1 percent.

Russia’s invasion of Ukraine, high world inflation, the disruption of global value chains and the slowdown of the main economies are part of the picture. We can hardly imagine a country not affected by the fertilizer shortagehigh food prices or an energy crisis due to the war.

Few regions did not have high inflation. In response, the reaction of the central banks was synchronized: the United States raised the interest rate from 0.25, in March 2022, to 4.5 percent in December of the same year; the European Central Bank raised 50 basis points, leaving it at 2.5 percent; the Bank of England raised it by 50 basis points, placing it at 3.5 percent; the Central Bank of Norway, to 2.75 percent, and the Bank of Switzerland raised it by 50 points, leaving it at 1 percent. Colombia was no exception and the reference rate, which at the end of 2021 was 1.75, grew 5,800 percent, reaching 12 percent.

(Also read: Get ready: these are the ones that rise 13.12% due to pocket inflation)

In a perspective that covers 15 years, Colombia is in terms of growth above the world economy, advanced economies and Latin America. This places us as an economy with potential for growth, attractive for investmentan asset that we cannot lose.

This behavior during the last two years was reflected in some social indicators: we recovered the employment rates of the pre-pandemic and more than 1.5 million jobs were created. It was evident as never before that the best strategy to generate employment is to promote economic growth. The pending is the very high level of poverty and inequality. That must be our great anguish.

In the social sphere, the challenges demand timely and fast actions. Although the labor market improved, a double-digit unemployment rate is highPoverty levels close to 40 percent are unacceptable and there is a lack of a way to reduce inequality.

Colombia has been characterized by having stability indicators that are close to international parameters. However, in 2020, 2021 and 2022 we moved away from this favorable trend. Inflation of 12 percent far exceeds target inflation and is higher than world inflation of 9.1 percent.

It is common to measure macroeconomic vulnerability by tracking twin deficits. At the end of 2022, the fiscal deficit would have been 5.6 percent and the current account deficit reached 6 percent. Undoubtedly, imbalances of this magnitude are not sustainable in the medium term.

The public sector cannot borrow indefinitely. The import payment, external debt service and capital flows abroad require solid sources of resources, such as exports or foreign direct investment. Added to this is the impact of the tax reform on investment, the business sector and the mining-energy sector. Part of the economic stability of the use given to the resources from this reform. What percentage of this will be devoted to reducing the deficit and reducing debt?

For 2023, the growth forecasts of different analysts fluctuate between 0.5 and 2.2 percent. As we indicated, our analysis shows that it is most likely to be 1 percent. Clearly, this rate is insufficient and will impact the generation of employment and the growth capacity of companies to undertake new productive investment projects, compromising the future.

What, then, are the drivers of growth? Agribusiness, mentioned by the Government as strategic. For it to be reality It is key to advance investments in public goodsin certified seeds, risk districts, tertiary roads, provide clarity on the use of the land and guarantee access to competitive raw materials for final goods and a supply of energy that this chain requires.

Promote and diversify exports industries should be priority. This will not come if we do not act decisively. We are an economy with a high country cost, in which procedures are cumbersome and without bold industrial policies. Infrastructure must be a national priority.

Talk about the effects of Opening of commercial borders with Venezuela. While it is true that bilateral trade has potential – in the past it did – the opportunity lies in integrating products produced by binational efforts to sell them to the world, showing synergies that allow taking the best of both countries to be more competitive with others. nations.

A year of low growth is undoubtedly a threat to job creation. For this reason, the discussion and the result of the labor reform are extremely important. Any reform must have among its objectives generating employment and reducing informality. The concerted 16 percent increase in the minimum wage was, in our opinion, a necessary measure to recover the purchasing power lost by households given inflation, especially those with low incomes, for whom it will be 14.5 percent; however, it is still a challenge for the generation of formal employment.

From public finances, the Ministry of Finance estimates a reduction in the deficit from 5.6 to 4 percent of GDP in 2023 and a moderation of public debt, placing it at 57 percent of GDP. We know the collection with the tax reform. However, the crucial data will be to know what part will be used to cover the debt and what part will go towards new spending announcements given by the Government. This question will possibly begin to be cleared when the budget addition is presented.

It is essential to maintain healthy public finances and that all messages go in this direction. Otherwise, growth would be compromised and the markets would punish debt conditions.

The work of Congress will also impact growth. were announced health, pension and labor reforms. Your discussion should be broad, include all the actors involved; The degree of debate that is demonstrated in these procedures will be an important thermometer of the Colombian democratic reality. The clarity of its contents is vital, since it can impact the business climate, the confidence of investors and consumers. Only the democratic debate will be able to build sustainable reforms in the long term.

The path to high growth and must be sustained strengthened, this 2023 will be difficult, efforts are reinforced to redouble. Progress was made supporting the demand with the increase in the minimum wage. Now we must think about incentives and favorable conditions for the productive apparatus, so that doing business and staying here is attractive. We insist that an anti-cyclical policy on the monetary front should be evaluated to encourage investment.

Competitiveness must be part of the discussion. The time is right, given the review of the development plan that will outline the route for years to come. What better opportunity to lay the foundations to achieve high and sustained economic growth in which the company generates dynamism and, as we have proposed, a public policy is drawn up based on a two-lane highway that advances economically and in the social

Unemployment: tips to face the fear of losing your job – Personal Finance – Economy