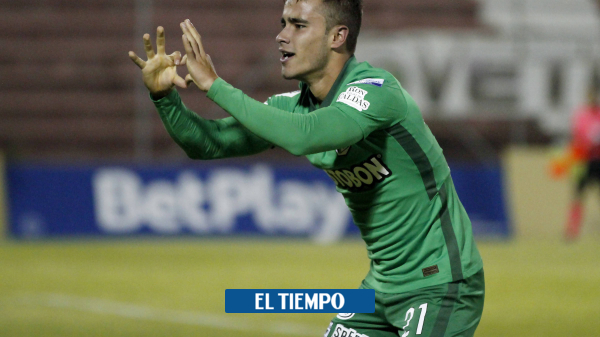 The Colombian Football Federation announced this Wednesday the list of 23 players who will represent the country in the South American Sub-20 which will begin this January 19 in Cali. And the absence of a name sparked controversy.

Is about Thomas Angel, Atlético Nacional striker, who scored goals at the beginning of the team’s preparation, at the end of 2021, but then he lost ground until he was left out of the tournament, by decision of DT Hector Cardenas.

“The decisions go through the assessment of the preparation time we have, the calls, the current events, which counts in the choice of our athletes. In the end, there are 23 athletes who are going to represent us, all with the same possibilities and because of the versatility that the team needs, that’s why that decision was made,» Cárdenas explained this Friday, in contact with the press in Bogotá.

Héctor Cárdenas, coach in charge of the Colombian National Team.

The absence of Ángel arose a controversy, after Gustavo López, a journalist who follows the information of Atlético Nacional, put a circular on his social networks a version according to which the attacker was left out because Alvaro Gonzalez Alzate, head of Difútbol and vice president of the Federation, would have imposed Isaac Zuleta, attacker of Getafe B of Spain.

González denied that version, consulted by EL TIEMPO. “False and reckless that billboard. I don’t even know this Zuleta, and furthermore, as it has been said, never, never hear me, I interfere or contribute to managerial interference in the technical decisions of each and every one of our national teams in any category or modality, ”he declared.

“He publicly summoned any member of an active or past Federation coaching staff who denounces the contrary to this sustained by me. Even those former technical directors who have falsely shown themselves to be my opponents regarding some concepts and guidelines in my role as a member of the Executive Committee of the Federation ”, he added.

The preparation of the Under-20 National Team began in September 2021, when Héctor Cárdenas, then the coach in charge, called a microcycle of 23 players, after the resignation of Arturo Reyes. Angel appeared on that list.

Then, in November and December 2021, the National Team played the Revelations Cup in Mexico and then a friendly home run in Chile. Ángel and Zuleta were on the list.

In the first tournament, Ángel scored one goal, and then, in Chile, in three games, the son of the former Nacional, River and Aston Villa scored five goals.

However, 2022 was not the same for Ángel. Cárdenas was ratified in March as property DT and the first tournament he directed was the Mauricio Revello (formerly Hopes of Toulon). The attacker went blank in that tournament.

From that moment on, Cárdenas did not call him up again for a microcycle in August, nor for a couple of friendly matches against the Dominican Republic, nor did he appear among the 18 players who participated in the South American Games, in which Colombia won hung the bronze

Ángel, meanwhile, could not even find continuity in Nacional. The team, champion in the first semester and eliminated in the second, had four coaches throughout the year: Alejandro Restrepo, Hernán Darío Herrera, Pedro Sarmiento and Paulo Autuori. With none it was possible to consolidate. He barely played 131 minutes, in five games, counting the League and the Colombian Cup.

Cárdenas called him back in the last calls of 2021, for four friendlies (two against Ecuador and two against Peru) and a microcycle in December. In the matches against the Ecuadorians in Techo, Ángel scored two goals. But he now he was left out.